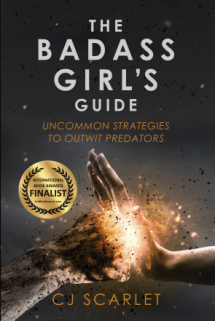 I don’t know about you, but I was raised to be nice to everyone. I was taught to avoid being rude at all cost. To smile through awkward situations. To giggle when I felt uncomfortable rather than risk embarrassing someone who was just “playing” with me. To be flattered when a boy hit me on the playground because it meant he “liked” me. To subsume my needs in favor of others’ needs. To expect men to be my rescuers if I was in danger. Basically, to be a good girl and not make trouble for anyone.

How many times in your life have you ignored the blaring sirens from your intuition and sat silently as someone violated your boundaries? Or worried as the creepy guy from your dorm followed you to class? Or suffered through regular sexual harassment at work? I sure did; more times than I can count and all in the name of being polite.

Many of us were raised on a steady diet of Cinderella, trashy romance novels, and movies in which the female leads were helpless victims who breathlessly waited for rugged masculine characters to save them. Movies with strong female characters who fought back against their attackers were almost non-existent.

It’s a strange paradox—we spend so much of our lives being hypervigilant about potential danger but become utterly helpless when we’re confronted with uncomfortable or dangerous situations. We smile when someone pays us an inappropriate compliment at work. We roll our eyes when a man makes a crude joke or gesture. We stiffen but don’t necessarily move when someone brushes up against us.

Why? Why do we “make nice” when we’re treated with disrespect? Our instincts are correct, but we override them because our early training was so strong. Part of the reason is fear—that the situation will escalate if we object, that we’ll embarrass the other person or ourselves, or that the person we confront won’t like/love/employ us anymore. We’re also often clueless about how to respond. Then there’s the pervasive, personally-held belief that we can’t take care of ourselves, so we demure rather than react.

If we did trust our intuition as children and speak up, we may have been told we were overreacting or we were ignored. In some cases, we may even have been punished for saying bad things about Uncle Joe.

All this leads us to feel helpless, which leads to a sense of hopelessness and powerlessness. Denial is also a huge factor; we deny what’s happening to us in favor of making excuses for the perpetrator: “He was just kidding.” “I’m just being overly sensitive.” “He didn’t mean it.” Or, my (least) favorite, “Boys will be boys.” This unfortunate perspective lets men off the hook when they behave badly.

If you read the Introduction [to the book], you know my story. I was what is known as a serial victim—someone who was victimized multiple times, in my case because of a history of childhood molestations that left me more vulnerable and made me doubt my own instincts when it came to danger. It also led me to engage in risky behavior that put me smack in the path of predators.

What I know now, after years seeking help for my own personal traumas and advocating for others, is that I was unconsciously sending signals to predators through my body language and behavior that I was a good target.

Even worse, in cases where I knew the perpetrators, I would work to make them feel better about what they’d done because I didn’t want them to feel badly about themselves. My attempts to reassure my assailants were my way of maintaining a measure of control over the situation (this behavior is called “fawning,” which I address in Chapter 2). After all, if I consciously admitted that someone I trusted was intentionally hurting me, I would have to do something about it, and if I did, one of two things might happen: (1) they would get angry and not like/love me anymore, or (2) they would get violent and hurt me even worse.

Sounds bizarre, right? It’s not; it’s a well-known phenomenon among serial victims. I believed there was something inherently wrong with me that made good people do bad things, and it seemed obvious bad things would happen to me.

The very idea that society in general, and our parents in particular, raise us to be polite regardless of the situation and to blame ourselves first outrages me. After all, why should we spare the perpetrators’ feelings when they clearly don’t give a damn about ours? They’re the ones who ignore and disrespect our boundaries, and it’s our right to confront them and protect ourselves!

Well, I’ve traded in my polite “V” (for victim) tattoo—the apparently invisible imprint on my forehead that predators could clearly see—for a mental “Back off!!” attitude that has kept me safe for nearly three decades now.

We Are Thwarting Our Own Happiness

An alarming number of women and girls, even those who’ve never been victimized, state that they feel a general sense of self-loathing and shame. And for those who have been victimized, add self-blame to that toxic mix.

As a result, we give away our power to others and allow them to dictate our lives. Yes, we do. Every time we let someone lead us into a decision we’re not comfortable with, or allow them to violate our boundaries, we’re relinquishing our power.

These feelings are at the heart of why we remain so vulnerable to predators. I’m bringing them to light so you can understand—I mean truly grasp—how this mentality sets us up for victimization. And more than that, this self-defeating mindset serves to deny us the joy of self-love and self-esteem that are essential to living a happy, healthy life.

It’s time to reject the negative messages bombarding us in the media and society, to be gentle with ourselves, to embrace our perfectly imperfect selves, and claim our power. We must take ownership of and responsibility for our own lives, every single second of them, understanding that we’re the only ones who have our best interest in mind at all times.

Think you can’t protect yourself because you aren’t a martial artist? Haven’t taken formal self-defense classes? Because you’re too old? Physically unfit? Too timid?

Imagine for a moment you decide (and I don’t recommend this) to take down that wily squirrel who’s been raiding your bird feeder. You sneak up on tiptoe and BOOYAH! You’ve got the culprit in your hands!

No, what you’ve got is a whole mess of trouble! Think that squirrel is meekly going to give you control? Hell no! Ms. Squirrel is going to squirm and claw and bite and scratch and fight to get out of your grasp as if her life depended on it. She doesn’t care how big you are or how small she is; she’s determined to prevail. Even the most skilled black belt would be no match for this one-pound rodent.

That’s actually a pretty funny image—Jackie Chan getting his butt kicked by a common brown squirrel—but I want you to take it very seriously because that image might save your life one day.

Better yet, let’s use the imagery of the Australian Tasmanian Devil. Although just the size of a small dog, it has the strongest bite of any land mammal and is so ferocious it can repel almost any predator that comes its way. If you recall the old Looney Tunes cartoons, “Taz” is a whirlwind of fists and feet, fangs and raw power. In addition, the real Tasmanian Devil uses a pungent body odor and nerve-racking screech to ward off its enemies.

Where to purchase The Badass Girl’s Guide: